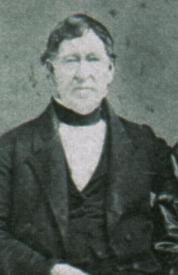 The cornerstone of the new Blandford Meetinghouse was laid by Captain Isaac Damon, of Northampton, the principal architect. Raising the frame commenced on Monday the 17th and finished on the 19th. During the process the ropes got twisted on the gin pole, and the sailors hired for the task could do nothing. John Collester, Blandford born and bred, climbed up and was able to straighten the ropes. The chiseled stones of the foundation were cut from quarries in Chester and the large beams came from Otis.

In a few short months this magnificent building was completed and on October 30, 1822 the New Meetinghouse was dedicated with prayers and scriptures by Dorus Clark.

Isaac Damon based his design on two known predecessors: a church in Pittsfield by Charles Bulfinch dated 1789-93, and drawings for a church in a carpenter’s handbook, The Country Builder’s Assistant, written by Asher Benjamin in 1797. What was new for Damon to adopt is clearly seen when facing the church. Entry is in the gable end of the building and the tower does not go to the ground. Rather, the building has a shallow vestibule, which has its own pedimented roof, and the tower – in the form of a steeple – has been moved back to the roof of the main block of the building.

The steeple is a three-stage structure with a square base and belfry, which has louvered openings on all four sides, framed with arched surrounds. Each corner of the belfry roof has a carved urn ornament. Above the belfry is a closed hexagonal stage whose projecting cornice is supported by engaged Roman Ionic columns. The third stage is low, hexagonal in shape, and paneled. It is topped by a two-part dome and a banner style swallow-tailed weathervane like the one on Boston’s Old North Church. The proportions of the steeple are graceful and its design and workmanship reveal the work of an accomplished architect. 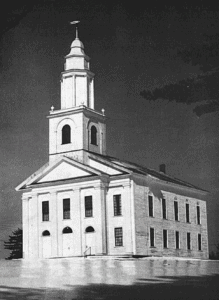 The interior of the White Church was originally a “reversed plan church.” The pulpit was on the entrance end and placed in a small semi-circular niche underneath the steeple. Doors on either side of the curved wall, opened into the large auditorium room, the entrants thus facing the congregation. Probably few were late to church.

After major renovations in 1866, the pulpit was moved to the opposite end, and a large Johnsen pipe organ was placed in the alcove with pews for the choir just below. At its peak, the choir numbered 80 voices enjoying the wonderful acoustics in the church.

In the early 1990s a committee of interested citizens began a full-scale restoration. Over 100 former residents returned for a Back-to-Blandford weekend in 1993. The weekend kicked off efforts to raise nearly $300,000 for the complete restoration of the building, which had fallen into disrepair. Replacing some of the foundation, installing restrooms, building a handicapped access ramp, scraping and painting the metal ceiling that covers the original decorated ceiling and repairing the roof were among the challenges. The White Church of Blandford is once again a building of pride for the whole community and will celebrate its 200th year anniversary in 2022.

© 2020-2022 The White Church of Blandford in Blandford, Massachusetts. All rights reserved.